On a macro level the telecommunications industry has continued to experience healthy growth in Vanuatu with significant increases in market revenues since the introduction of competition in 2008 with total revenues exceeding 4.5 billion vatu in 2016. 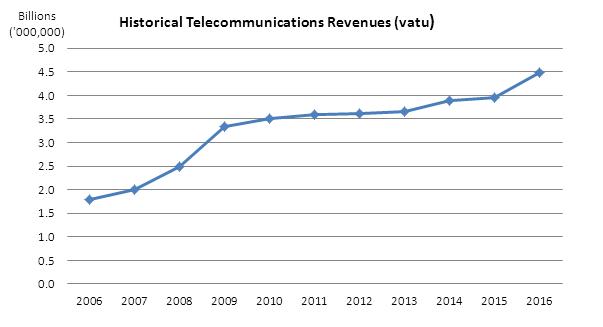 This growth has been predominantly driven by the large increase in use of mobile technologies with mobile phones becoming the primary mode of communication across the country, bringing deep social changes. This development had been stimulated by reduced access costs and greater mobile coverage created under the Universal Access policy, by competitive pressures as well as the ongoing reduction in handset and equipment costs driven by improvements in technology. All these factors have seen mobile penetration rates increased from 12% in 2007 to 71% in 2016 (that is 71 in every 100 persons carry a mobile handset).

Mobile subscriber growth has also grown strongly from 2014 to 2016, with strong growth in 2015, despite the devastating impact of Cyclone Pam in March of that year.

Although there is a tendency to focus mainly on the number of subscribers when analysing access to telecommunications services, this doesn’t give a full picture of the actual usage of the services themselves. By measuring the amount of call minutes made by consumers in the mobile market we can see how much mobile services are used and give insights on the benefits that these services are bringing. The total aggregate annual number of call minutes continues to increase year on year showing 5.8% growth from 2014 to 2015 and further 6.5% growth from 2015 to 2016

This again follows international trends and reflects the increased availability of mobile data (due to increases in data volume allowances, significant reductions in data plan cost and handset costs), increased network coverage, encouraging the uptake by consumers of over-the-top (OTT) services such as Facebook, Messenger and WhatsApp.

The decline in number of SMS is also has an effect on the amount of revenue generated .The graph below shows both the SMS total and revenue for its respective year

When looking at international bandwidth demand, the demand for data grew in 2016 with the total bandwidth capacity utilized on the submarine cable increasing by around 22% on 2015 levels. This growth in demand for internet bandwidth is driven predominantly by the significant growth of mobile data usage with total megabytes (MB) of mobile data downloaded growing from a combined total of 85,440,000 MB for 2015 to 272,690,000 MB for 2016 a huge growth of 500% over the previous year. By comparing monthly usage patterns there was an increase of 158% in monthly downloads from December 2015 (13,381,137 MB), to December 2016 (34,521,414 MB).

This, consequently along with price reductions has seen the capacity uptake on the international fibre increase by approximately 22% since June 2016.

The number of fixed internet subscribers, particularly fixed wireless subscribers, experienced a significant increase with the introduction of the cable and are now just under 10% higher in 2016 than they were 2014.

In conclusion, competition in telecommunications markets has been most vigorous and effective in recent years with evidence of reducing prices, improving services and stimulating innovation and investment predominantly in the area of mobile data services. Further development is required to see similar large scale changes in the fixed broadband internet service provision. Access to improve wholesale pricing and capacity, increases in coverage and improvement of technology across the country will lead to improved service delivery and improved retail pricing providing consumers with choice and greater value for money.